I just got a new Other World Computing (OWC)  Thunderbolt 3 Dock, set it up and it was working well with my 2016 MacBook Pro. I loved that plugging in just one USB-C cable gave me power, a second monitor and a fast, hard-wired Ethernet connection. And I can recharge my phone via the dock instead of my computer. It makes my laptop much more “grab and go”.

Since I occasionally use a USB keyboard when docked, as recommended by OWC I downloaded and installed the “THUNDERBOLT 3 DOCK OWC Thunderbolt Dock Driver” from the OWC Support Software Drivers page. I restarted my computer, tried to log back in but when I did, the startup progress bar hung at or near the end and the computer would never get to the desktop screen: 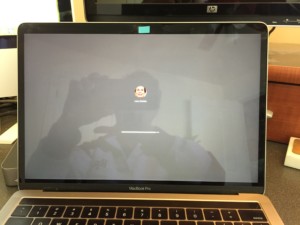 After two or three restarts and failures, I tried starting in “Safe Mode” by holding down the Shift key on startup. Safe Mode did not seem to work either. I always got back to the same gray login screen and no “Safe Mode” indicator.

Luckily, I had a bootable backup on an external USB drive from before the installation of the OWC software. (Thanks, SuperDuper! for the great backup software!) I knew what file was installed and where by opening up the uninstall script (found on the installer disk image) in a text editor:

So I booted to the backup drive (by consulting the Apple startup key combinations for Mac and seeing that you hold down the Option key during startup to boot from an external drive), navigated to the “/Library/Extensions” folder on the “Macintosh HD” drive and manually deleted the “OWCThunderboltDockChargingSupport.kext” bundle (using the Terminal app and the “rm” and “touch” commands from the uninstall script).

While I was there, I saw the SoftRAID.kext that was also installed by the OWC installer. The SoftRAID.kext file is NOT included in the OWC uninstall script and I consider that a bug as well.

The only thing “unusual” about my computer is that it has Apple FileVault enabled on the hard drive. So if you are trying to reproduce the problem and can’t on a “vanilla” 2016 MacBook Pro, I would enable “FileVault” and then try installing the OWC driver (of course being prepared to not boot and lose access to the drive).

Needless to say, this was not the experience I was hoping for. I trust OWC can improve this so that no one else in a similar situation has to go through this. I’ve written to them about this issue and will update this post if I get a (helpful) response.

For now, I will not install this OWC driver again.

Otherwise, I’m happy with the dock and look forward to getting back to work.

About the Author: Larry Daniele